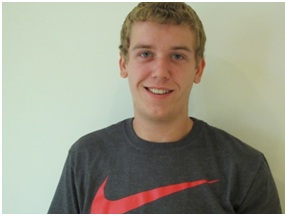 My name is Daniel Cooper and I am the Zanesville Take Steps for Crohn's and Colitis Honored Hero. I am 17 years old and will be a senior at West Muskingum High School this fall. I was diagnosed with Crohn's disease the summer before my sophomore year. It was early July and I was at soccer camp when I began experiencing abdominal and rectal pains. The pain would be so severe at times, I could hardly walk or even sit down. After several weeks of pain, I began having diarrhea and rectal bleeding. I saw four doctors and endured multiple testing over a two month period before the diagnosis of Crohn's disease was confirmed.

I missed many days of school my sophomore and junior years. On days when I didn't have pain, I had extreme fatigue and nausea. Some symptoms were due to the disease and some were due to the medications. I have also been diagnosed with IBS. This is common among IBD patients because their intestines are extra sensitive.

It has been difficult trying to make up school work, dropping classes I normally excel in, and watching soccer from the sidelines instead of playing on the field. I was looking forward to playing soccer again and conditioned with the team all summer. However, I recently found out I did not earn enough credits to play soccer my senior year. I am so thankful for all the support from my family, church, friends, and teachers. I have a full schedule for my senior year and I plan to go on to college to study engineering.

Unfortunately, I know several people with Crohn's disease including my cousin Samantha who was diagnosed seven years ago at age 11. There has been a significant increase in the number of IBD cases and that is why it is so important to me to support CCFA and help spread the word about Crohn's and Colitis. Participating in Take Steps and raising money will lead to a cure.