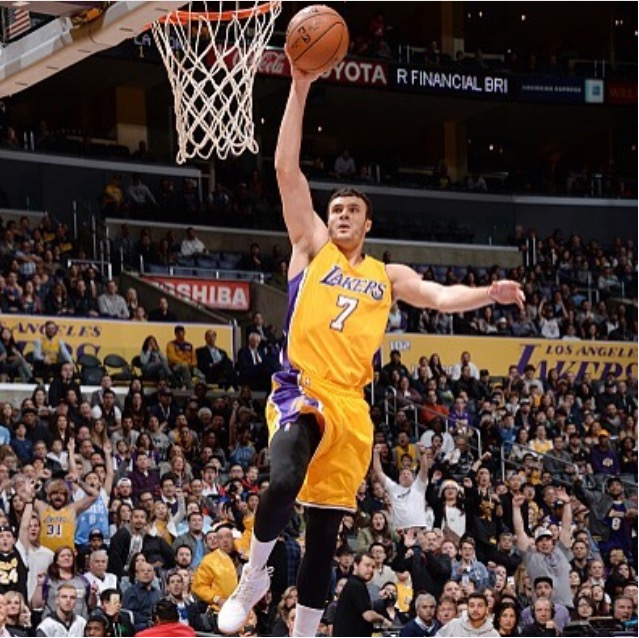 Larry Nance, Jr. is a force on the basketball court – as a power forward for the Los Angeles Lakers, he had an impressive rookie year in 2015, playing in 63 games and averaging 5.5 points per game. Now, following a wrist injury, Nance is ready and raring to go for the 2016 NBA season.

Standing at 6 feet 9 inches tall and 230 pounds, it’s hard to imagine Nance as anything but the impressive athlete that he is today. But there was a point, not too many years ago, when Nance could barely get out of bed, let alone play basketball.

Nance was diagnosed with Crohn’s disease when he was 16 years old. However, for several years before he received an official diagnosis, he suffered from symptoms of the disease – painful cramping, weight loss, fatigue, and stunted growth - with fatigue being the most debilitating. The extreme tiredness, a common symptom experienced by patients living with Crohn’s disease or ulcerative colitis, impacted his life majorly.

“I didn’t deal with [the fatigue] well. I laid around the house all day, I had no energy [to do anything],” he said. “I slept in class and I wasn’t that kind of kid… I didn’t have the energy to practice or play [any sports].”

After several years exhibiting symptoms, his parents realized that something was seriously wrong and took him to see the doctor. After performing a few diagnostic tests, Nance was diagnosed with Crohn’s.

Based on his doctor's recommendation, Nance began a treatment regimen of infliximab (Remicade) and methotrexate, both of which he is still on today. He said the difference in how he was feeling was night and day after beginning the medications.

“Once we got [my disease] under control, I blossomed and started on the path that I’m on now [as a pro-athlete],” he said.

Nance grew nine inches from the time of diagnosis to today, and has gained nearly 100 pounds. But most importantly, his fatigue became almost non-existent.

“I’ll experience it very randomly but as long as I stay on track with my medications, it’s managed,” he said. And when the fatigue does reappear, he tries to log as many naps as possible.

Now, instead of being consumed by fatigue, Nance is focused on the start of his second year in the NBA and helping other IBD patients. He often interacts with pediatric patients at Cedars-Sinai Medical Center when he receives his infliximab infusions.

His advice to others experiencing debilitating fatigue and other crippling IBD symptoms?

“Find what works for you and stick by it,” Nance said. “[IBD] is very personal. You need to make your illness work around you. You still control yourself, don’t let Crohn’s define you.”