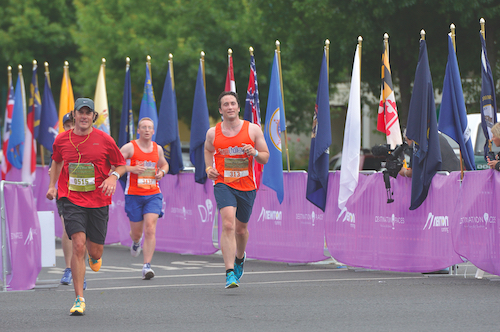 Join Team Challenge in the UK! What better way to see London than on foot with Team Challenge? Join competitors from more than 50 countries to run or walk 26.2 miles on this world stage! The TCS London Marathon is the third largest running event in the UK, and it is part of the World Marathon Majors.

Set over a largely flat course around the River Thames, the race begins at three separate points around Blackheath and finishes in The Mall alongside St. James's Park.Nestled in between, runners pass by the Old Royal Naval College and head towards Cutty Sark drydocked in Greenwich. Heading next into Surrey Quays in the Docklands, and out towards Bermondsey, competitors race along Jamaica Road before reaching the half-way point as they cross Tower Bridge. Running east again along The Highway through Wapping, competitors head up towards Limehouse and into Mudchute in the Isle of Dogs via Westferry Road, before heading into Canary Wharf. Race date is October 2, 2022.