My Journey with Crohn's 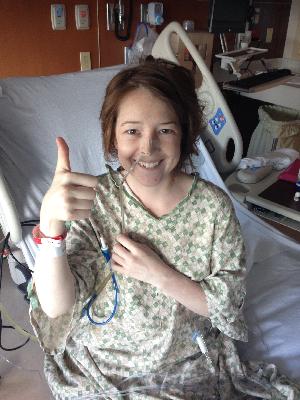 May 9, 2016
For those of you who’ve been with me on my journey with Crohn’s disease, thank you for your love, support, and understanding. I wouldn't be here without you.
For those of you who are unfamiliar with my story, let me begin by sharing it with you.

I was diagnosed with Crohn’s disease in August of 2008 after an emergency procedure in which surgeons removed just under a foot of my diseased small intestine. The preceding months of severe inflammation had damaged my small intestine beyond repair. Doctors knew little about Crohn's at that time, and I was lucky to enjoy years of remission.

In early 2014 I began to experience symptoms again. More hospital visits, rounds of tests, and a colonoscopy reconfirmed my diagnosis, and I began to search for ways to mitigate the manifestations of this incurable disease.

My symptoms worsened and I met with multiple gastroenterologists, spoke to doctors conducting research studies to see if I was a good candidate (I was not), met with friends (and friends of friends), and even considered the radical treatment of stool transplants in an effort to curb the Crohn’s. I took countless medications - some with very dangerous side effects like lymphoma - and subsisted on a meager diet. I was frail, weak, constantly dizzy and in pain.

By February 2016, my doctors and I were running out of options. They recommended the maximum adult dosage of Prednisone of 60mg. This steroid was the only way to keep Crohn’s-induced inflammation at bay and allow my body to intake calories or water. Long-term side effects include osteoporosis, malfunctioning adrenal glands, and high blood sugar. I also took pain medication, anti-nausea pills, and prescription sleep aids to counter the effects of Prednisone, but to no avail.

In May of 2016, I woke up from another emergency surgery and discovered I had an ileostomy. During the operation, doctors determined that my small intestine was so swollen, it could not be reconnected to my large intestine. In order for my body to function properly and heal, an ileostomy was necessary. At first, I was horrified and shocked, but quickly I was relieved to finally have the “good” kind of pain - surgical recovery pain - instead of the perpetual pain unique to chronic illness. When my nurse told me that people live totally normal lives with an ileostomy, I was thankful to have one: my life hadn’t been normal in a very long time.

I quickly gained back my strength and was able to control symptoms with a medication that suppresses my immune system, Azathioprine. This medication has actually been the subject of comparative drug trials supported by the Crohn’s and Colitis Foundation. These trials aim to find new uses for existing therapies, enhance the effectiveness of these medications, and to minimize harmful side effects.

Before I had a reversal procedure to remove my ileostomy in October 2016, I achieved a long-held goal - to climb the tallest mountain in Colorado. Now, I aim to achieve another one with this marathon. Crohn's has been with me for over a third of my life now. Though it has delayed or changed some of my plans, Crohn’s brought out the best in not just me, but in those around me. For this, I am most grateful.

I will leave you with what one of my nurses said to me, “As you get better, you’ll realize just how unwell you were.” I hope to keep getting better and make a difference for Crohn’s and colitis patients.

See you on October 13 at the Chicago Marathon!

About Crohn’s disease and ulcerative colitis

Known collectively as inflammatory bowel diseases (IBD), Crohn’s disease and ulcerative colitis affects almost 1 in 100 people. They are painful, medically incurable diseases that affect the digestive system. Crohn's disease may attack anywhere along the digestive tract, while ulcerative colitis inflames only the large intestine (colon). Symptoms may include abdominal pain, persistent diarrhea, rectal bleeding, fever, and weight loss. Many patients require numerous hospitalizations and surgery. Most people develop the diseases between the ages of 15 and 35; however the incidence is increasing in children.