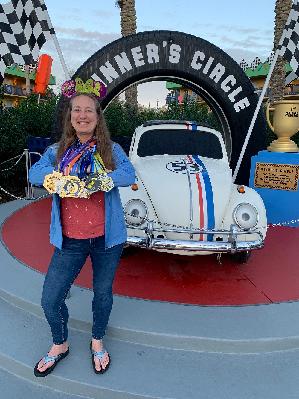 2020 Dopey Challenge
I have decided to make a difference in the fight against Crohn’s disease and ulcerative colitis.  On November 7, 2021 I will run in the New York Marathon. This will be a big undertaking, but it will all be worth it because your donations will not only motivate me to the finish, but they will help us get closer to the cure.  Won’t you please consider a donation today?

On February 12, 2015, I was diagnosed with serve to moderate Crohn's disease after having a pain in my side for weeks that would not go away. Once I started the first medication I was prescribed, the symptoms continued to get worse. I would get sick after eating (something that had occurred off and on for awhile, but I blamed it on a stomach bug, bad food, or gluten exposure). I would have gut pain so bad that sitting up made me want to cry, or I would spend hours of a day in the restroom. I felt that my life had been paused and I was in a continuous loop of exhaustion and pain. In May 2015 I started Remicade, a Biologic infusion that was known to help Crohn's patients reach remission. Unfortunately for me it alone was not enough.  After many ER and doctor visits, it was decided to do surgery to remove a section of my small and large intestines that had been so badly damaged by the disease that food was struggling to pass through causing me pain and excessive vomiting. On October 5th, 2015, the doctors removed 12 inches of my small intestines and 2 inches on my large intestines. After 10 months of suffering I finally felt like I was turning a corner. In April 2016, I was told that I had reach remission.
While my disease is in remission, I still receive Remicade infusions every 8 weeks, monitor what I eat, and do everything I can to stay this way as long as possible.
I am so honored to run for the Crohn's and Colitis Foundation, and for it to be at the NYC Marathon that I get to do, just makes it that much more special.
About Crohn’s disease and ulcerative colitis
Known collectively as inflammatory bowel diseases (IBD), Crohn’s disease and ulcerative colitis affects almost 1 in 100 people. They are painful, medically incurable diseases that attack the digestive system. Crohn's disease may attack anywhere along the digestive tract, while ulcerative colitis inflames only the large intestine (colon). Symptoms may include abdominal pain, persistent diarrhea, rectal bleeding, fever, and weight loss. Many patients require numerous hospitalizations and surgery. Most people develop the diseases between the ages of 15 and 35; however the incidence is increasing in children.
The Crohn's & Colitis Foundation is the largest non-profit, voluntary, health organization dedicated to finding cures for inflammatory bowel diseases (IBD). The Foundation’s mission is to cure Crohn's disease and ulcerative colitis, and to improve the quality of life of children and adults who are affected by these diseases. The Foundation works to fulfill its mission by funding research; providing educational resources for patients and their families, medical professionals, and the public; and furnishing supportive services for those afflicted with IBD.
View More