My Battle with IBD 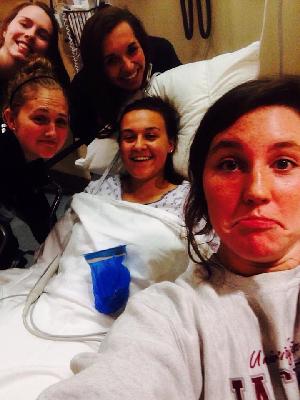 I was scared to be this vulnerable and share a story that not many people know about. But if I can help just one person, then this is all worth it. Thank you for taking the time to read, learn, and donate toward my (and other's) battles. Here goes nothing.
I was rushed to the hospital for the first time when I was 15 years old. I didn’t really know what was happening to me. There was shooting pain throughout my abdomen and spine so badly that I couldn’t stand up. & this is where my story begins…

From that day forward, I was having “episodes” weekly. (We started calling them “episodes” so I wasn’t embarrassed talking about them in public, or in front of my friends.) Whether I was running a cross country race, sitting in class, enjoying family dinners, or trying to spend the night at a friend’s house; I was constantly doubled-over, screaming of stomach pain. At the age of 15, doctors wanted me on upwards of 8 pills a day—my stomach was lined with multiple ulcers. As a 15 year old.

I tried my best to keep consistent with the medication treatments, but a high schooler trying to focus on school, being a teammate, and applying to colleges, I had enough on my mind. By the time I was 17, I was tired of it. I went to nutritionists, holistic practices, endless amounts of GI appointments, just to find something to numb the pain. But nothing seemed to work—I tried various amounts of diet treatments, pain management techniques, yoga and exercise.

I was always so embarrassed to even go out to dinner with friends or make simple plans because I knew I would be bleeding out of my stomach 30 minutes after every meal (or just when my stomach decided to attack itself). I was terrified to leave home and go to college, but it was my dream to get an education outside the state of Illinois. I struggled. I struggled to find the balance of what would make me flare up and what wouldn’t.

It wasn’t until I was 20 years old, July of 2014, where I received a clear diagnosis. At this time, I was having severe hip pain at work (which I had had for the past 3 years but this time it was unbearable). I took one pill of Advil to just relieve my pain for even a minute. One hour later, I was vomiting blood while laying on my college apartment bathroom floor. I laid there for hours. I didn’t know what to do, my parents weren’t around, and I was scared. For the first time in 5 years, I thought this was the end for me.

My roommates came rushing in and drove me to the ER where I stayed for 5 days. We learned that I had severe Ulcers not only lining my stomach but intestines also, high case of IBS, and a large hernia in my esophagus causing high Acid Reflux. I was put on even more medications and an extremely strict diet. 2 weeks later, I came back for a follow-up visit. It was here, in this conversation, that everything changed. The GI doctor told me that he didn’t think I was going to make it through that night. And if my roommates hadn’t brought me in, I wouldn’t have been standing here today. This was life changing.

At this point, I knew that it was just going to get worse and worse. Living with IBD, you never know when an “episode” is going to strike. It fills you with anxiety and embarrassment; for the first couple of months, you feel like you can't even leave the house. From that day forward, I’ve struggled, it has not been easy and by no means will it ever get easy.

Now at the ripe age of 26, I’ve been hit with one more battle. 2019 was supposed to be the first year that I didn't make it to the hospital. Supposed to be. During the first week of November, I was experiencing unbareable neck and spinal pain. I was nauseous, numb, and experiencing symptoms I had never had before: hand tremors, loss of vision, and complete loss of feeling in my limbs. I was then diagnosed with symptoms of AS—Ankylosing Spondylitis. The pain is now no longer just in my stomach and intestines... this autoimmune disease attacks all healthy tissues in your musculoskeletal system, specifally my neck, spine, and hips.

I learned that 5 in 10 people with IBD are battling AS without even knowing it. I was always associating spinal pain with my ulcers, thinking an episode is just coming soon. But 11 years later, I learned that this wasn't the case and I have probably been battling AS without even knowing it. That means there are still 50% of people out there with IBD experiencing the same pain and symptoms without any treatment...

I am constantly in pain throughout my neck, spine, and hips. I am in so much pain that I can barely sleep most nights. I am having new “episodes” of losing my vision, all feeling in my limbs, blackouts, and more. These are happening more and more frequently. The only time I am not experiencing symptoms is when I am in motion: running. But when I come off of this "painless high" I hit so "low" to a point where it hurts to even breathe literally leaving myself feeling almost paralyzed.

During this pandemic, I have been in and out of hospital visits, Brain & Spinal MRIs, and more neurological and pain management testing. It's a scary time but it's also almost scarier not receiving treatment...

Running used to be my escape from reality, and I don't want this to stop me. It’s still my dream (and always will be) to run a marathon. Growing up around NYC and moving back in my 20’s means there is nowhere else I would rather experience my first marathon. Running through all 5 boroughs in one day is absolutely beautiful and incredible. It’s going to be hard to fight the pain, but I want to fight so others don’t have to. I want to fight for a cure for these awful diseases.

I’m here to prove that no matter what life throws at us, we can conquer it. My goal is to raise $3,500 to fight for a cure for all IBD diseases and disorders. I’m here to raise awareness of autoimmune diseases & I’m here to fight back at what life has thrown at us. Thank you to all who have donated, it means more than you know.