Pedaling for a Cure! 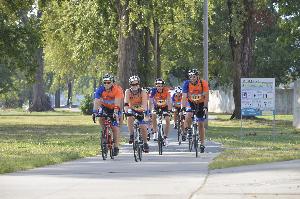 On September 10, I will be participating in the Maine Lighthouse Ride in Portland, ME in my 15th official event with Team Challenge for the Crohn's & Colitis Foundation. Please consider donating to my fundraising goal, no amount is too small!

Our story
For those who may not know, I was diagnosed with Ulcerative Colitis in January 2006. My symptoms started during an especially stressful time of my career (busy season while I was working at a public accounting firm) and it took multiple scopes and multiple doctors before I found a medication regime that has kept my disease under control. While I've been blessed to be in remission most of the time, so of these medications have side effects that do negatively impact me on a day-to-day basis. One of the medications I take is an immunosuppressant that is more commonly used for transplant patients, so I am more susceptible to getting sick and/or just feeling run down pretty frequently.

In addition, my husband was diagnosed with ulcerative colitis in March 2011 - I swear, we were both healthy when we married! His journey was a bit more sudden and intense then mine - after losing nearly 50 pounds around the time of his diagnosis, he had to undergo an emergency colectomy three weeks after his diagnosis as damage from his disease ruptured his colon. After living with a temporary illeostomy for 9 months and undergoing two more surgeries, he's now living life with j-pouch and is doing much better!

About Crohn’s disease and ulcerative colitis
Known collectively as inflammatory bowel diseases (IBD), Crohn’s disease and ulcerative colitis affects almost 1 in 100 people. They are painful, medically incurable diseases that attack the digestive system. Crohn's disease may attack anywhere along the digestive tract, while ulcerative colitis inflames only the large intestine (colon). Symptoms may include abdominal pain, persistent diarrhea, rectal bleeding, fever, and weight loss. Many patients require numerous hospitalizations and surgery. Most people develop the diseases between the ages of 15 and 35; however the incidence is increasing in children.