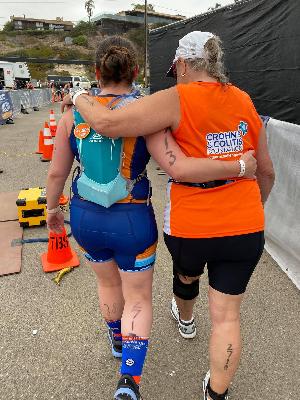 As some of you know, I have ulcerative colitis. I was diagnosed in 2006 after getting several bandaid fixes from a PCP during my first year of graduate school. It was very scary. After that time, I worked hard to get my body into remission where it stayed for several years. Last year, I had one of the worst flares, I’ve ever had. As I started to realize what was happening, my doctor got me in quickly for a diagnostic colonoscopy that showed a terrible flare as well as progression of my disease. I had one of the most frightening talks with my doctor about how biologics were going to be the next step. I was placed on a special steroid that directly targets my gut without the systemic side effects of the traditional steroids like prednisone (i.e. bone softening and weight gain etc). Because I responded so well I avoided biologics at that time. While I've never needed biologics, They're often the life saver for my friends.

In April of 2022, I went in for my follow-up colonoscopy and found that I'm back in remission!

Last year was my comeback story. This year I'm doing this for the other people I know who struggle with Crohn's and Colitis. In September, Ive decided to join my Team Challenge crew again. I will race again in the Malibu Triathlon. I'm already having nightmares again about biking those hills on the Pacific Coastal highway! I would greatly appreciate you considering supporting me by donating to my fundraiser to participate. I need a minimum of $2000 raised to participate, but I know we can do better!

About Crohn's disease and ulcerative colitis Known collectively as inflammatory bowel diseases (IBD), Crohn's disease and ulcerative colitis affects almost 1 in 100 people. They are painful, medically incurable autoimmune diseases that attack the digestive system. Crohn's disease may attack anywhere along the digestive tract, while ulcerative colitis inflames only the large intestine (colon). Symptoms may include abdominal pain, persistent diarrhea, rectal bleeding, fever, and weight loss. Many patients require numerous hospitalizations and surgery. Most people develop the diseases between the ages of 15 and 35; however the incidence is increasing in children. The Crohn's and Colitis Foundation is the largest non-profit, voluntary, health organization dedicated to finding cures for inflammatory bowel diseases (IBD). The Foundation's mission is to cure Crohn's disease and ulcerative colitis, and to improve the quality of life of children and adults who are affected by these diseases. The Foundation works to fulfill its mission by funding research; providing educational resources for patients and their families, medical professionals, and the public; and furnishing supportive services for those afflicted with IBD.