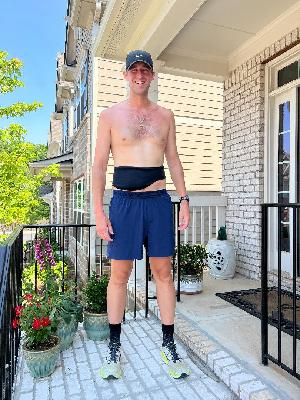 Hi friends and family! Welcome to my fundraising page for the Crohn’s and Colitis Foundation. I have decided to make a difference in the fight against Crohn’s disease and ulcerative colitis by participating in the Clearwater Running Festival. On January 28, 2023 I will compete in my first ever half marathon.

At the end of last year, I was in the best shape of my life. I was eating well and training for a triathlon. In December, I began experiencing GI issues and was then scheduled to have a colonoscopy at the end of the month. Days before the procedure, I tested positive for covid so the colonoscopy was canceled and postponed for 8 weeks. After a 10 day quarantine, I started to feel better but that only lasted for about two days before my health seemed to go downhill quickly.

In January (1/11), I had my annual physical exam and my lab work showed that I was anemic. At this point I was visibly sick, very pale, exhausted, and rapidly dropping weight. I went in three more times to have blood work done, and each time my hemoglobin level continued to drop.

I was admitted to the ER, received a blood transfusion, and was monitored to ensure my hemoglobin level went above 7 (it has to be at least 7 to do a procedure). The next morning (1/19), I had a colonoscopy and EGD where the doctor found serious inflammation and two large ulcers on my colon. The ulcers were bleeding, causing blood loss which in turn led to anemia. The inflammation was so severe that it was eating away at the calories I was able to intake.

After three days and two nights in the hospital, it was determined that I have Crohn’s. At this point I was down about 25 pounds but feeling hopeful. All of my doctors agreed that my rough go with covid, coupled with the flu shot I received at my annual, really ticked off my immune system and Crohn’s is an autoimmune disease.

Over the next two months, I was admitted to the emergency room three more times, spent 36 days total in the hospital, had nine blood transfusions and ten iron infusions, received IV steroids and B12 shots, started Remicade in conjunction with Methotrexate, had three CT scans, two X-rays, two colonoscopies, and an EKG, and lost a total of 65 pounds (putting me at a whopping 140 pounds).

It was during my fourth and final hospital stay that the possibility of surgery was put on the table. My doctors seemed optimistic that the Remicade + Methotrexate treatment would work, but my body was metabolizing the drug before I was due for the next treatment. My pain was becoming unbearable. I had a second colonoscopy that showed my inflammation was actually worsening, even on one of the strongest treatments. My disease was considered aggressive, so much so that the doctors were shocked that I didn’t show any signs of Crohn’s before all of this.

On March 21, just two months after being diagnosed with Crohn’s, I underwent surgery to have about 95% of my colon removed. In all honesty, I was devastated that it had come to surgery. But after seeing the images from my second colonoscopy and realizing how quickly things worsened, I knew surgery was my only option to get out of the hospital and on with my life. That, and the fact that seven GI doctors at Piedmont as well as two outside doctors all unanimously agreed that surgery was the only answer. They said that at that point in my disease, it was quite literally a life saving procedure. Life saving and life changing. I now live with an ileostomy and wear an ostomy bag and strangely, I couldn’t be happier. I am home with my wife and boys, I am healthy, I can eat mostly unrestricted, and I can exercise.

On May 18, two months after my surgery, I went on my first run. On June 4, I hiked Brasstown Bald, the highest point in Georgia, with 40 pounds of toddler on my shoulders. On July 4, I ran the Peachtree Road Race. On August 28, I climbed Stone Mountain with 31 pounds of baby on my back. I am more determined than ever and excited to train and compete in my first half marathon in January!

I also want to give a shout out to my smokin’ hot wife, Hillary. Without her I honestly wouldn’t be where I am now. I couldn’t have made it without her there everyday helping me do everything: she helped me walk, she helped me shower, she brought me food when I was sick of hospital food, she talked to my doctors and wrote down every detail they said. She most importantly taught me that the glass is always half full and this would not define me. Hill and our two boys were my motivation every single day to get better and get home. Now I can show my boys that setbacks in life don’t define who you are and what you are capable of doing!

If you are looking for a great cause to give to this year, this one is very near to my heart. Crohn’s kicked my ass and changed my life but I think I’m stronger because of it.