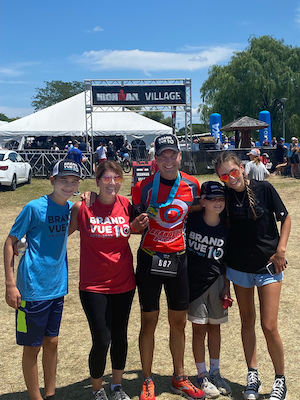 What is my "Why" for training for Ironman Lake Placid 2023? That's easy, as this race is 100% for our son Josh after being diagnosed with Crohn's Disease in February 2022.

My wife Kelly and I have 3 kids: Morgan, Josh and Cameron. These are active children, involved in a range of sports and many friend groups, and I'm proud to be their Father. Josh is our middle child, a bright 13 year old, who has always been our "pioneer of new activities". Yet in early 2022, life presented a medical emergency for Josh that quickly required the help of specialists. Crohn's Disease is an inflammatory bowel disease that causes chronic inflammation of the gastrointestinal tract. If the pandemic wasn't tough enough for all school-ages kids, Josh was forced into dealing with a chronic illness diagnosis and a new world of unknowns.

How did Ironman racing become a passion of mine? That story began in March 2020 with the pandemic, and my business and income came to a halt. Video games were something that connect Josh with his friends, and the first few weeks of the pandemic included lot's of time on Fortnite. My wife, Kelly, was trying to figure out how to learn to teach 6th grade from home, so she asked if I could get Josh outside and off video games for a break. My bike tires were flat, and I saw my $40 nike shoes by the door and thought I could do a run with Josh. Before this request from my wife, I had never ran, swam or biked in anything competitive. Men's league hockey was my once-a-week activity, as I was nearly out of shape in my early 40's. So Josh and I hopped out to the driveway, and while he rode his bike, I ran next to him for a mile. I remember feeling my legs being very itchy after that mile, as I hadn't voluntarily run or jogged in probably 20 years. But we talked a little, in between my heavy breathing, and accomplished our first outdoor pandemic activity together. A day or two passed, and we did it again, yet I added an extra mile to the activity. By the third time, we had added an old iPod to our activity, by taping it to Josh's bike so we could listen to music from the late 90's on the device. Then we bought a small speaker and added that to Josh's handlebars, while still adding mileage to our journeys. This special time with Josh was something new to my schedule, as the busy schedule we had with kid drop-offs, tons of activities, and a busy work schedule had all been paused. And I loved it.

By the time it was warm enough to run in shorts, I connected with my daughter's math teacher, who had run the Boston Marathon, and she officially became my go-to for anything running. I had my feet sized at a local running store, and bought my first pair of running sneakers. I was building mileage, and the distraction that running provided was helpful for my mental health and stress over declining business. And somewhere in there, I chose to turn away from drinking, so I could get up early and run the next day. By the Fall of 2020, I had raised over $500 for St Jude's Children's hospital and ran a virtual marathon in my hometown. It was absolutely life-changing. Who runs a marathon?! My neighborhood came to our home and hung out outside to celebrate while I had advil and we watched Football on an iPad together!

On weeknight in January 2021, Kelly and I were sitting on the couch, and a special came on TV about Ironman. I really didn't know what this race included, or even what distances participants had to race, but for some reason I started watching it. The story was about a young man in Florida who had down syndrome, named Chris Nikic, that was training to do Ironman Florida. This story of will power and accomplishment by Chris was extremely moving to my wife and I, while tears poured out of our eyes. Kelly looked at me and said "Don't get any ideas", and I smiled, wiped my tears, and within 5 days was registered to race Ironman 70.3 in Delaware, Ohio! My youth hockey coaching buddy found a used roadbike listing online and I scrounged enough money to get it to start training. And after a couple months, I signed up for 8 weeks of swimming at our local pool. But that first swim was indicative of a need for training, as the life guard asked me what I was training for. I told her I was Ironman training for the next 8 weeks, and just after 1 swim, she said I should pull-out of the race, as people that swim poorly could die on these races. That was all I needed to hear, and I came back the next day to get serious about learning to swim. I think I logged in about 35,000 yards of swimming in those 8 weeks, and successfully completed my swim portion of the Ironman in 53 minutes. My 56 mile bike ride was done in just over 3 hours, and I ran my half marathon in 2 hours and 13 minutes! My wildest dream had come true, and I had found a way to stay healthy, dissipate my stress, and be a good example for my family that we can do tough things. My business had picked up again, so financially things we improving as well. Life put me on a better path, and I would continue to pursue marathons and Ironman's shortly after that July 2021 race.

Our family was feeling back to normal by the holidays in late 2021, and our son Josh was swimming for the local swim club (also a new sport to him) and the school modified team. He was skinny, and I guess we just thought he was growing taller and just needed to fill out. But when he swam, we saw how skinny he was. It was just after the New Year in 2022 that he started to complain about his throat feeling bad, and feeling uncomfortable when passing a bowel movement. We scheduled an appointment with our pediatrician and started some Pepcid products for his throat and Miralax to clear any possible blockages in his digestive tract. But when he got on the scale, we realized he was actually 10 pounds lighter than he was a year previous. We quickly tried to find a GI doctor and get an appointment, but nobody was available for a month! Josh's condition continued to deteriorate, and it was taking a toll on him. He was missing classes, spending time in the nurses office, and even was walking awkwardly because his bottom hurt so much. His appetite was almost nothing, and we were forcing him to drink Boost and other high protein drinks to try and help with weight gain. One day in February 2022, he had a breakdown in front of us, and the pain was so much for him that he screamed he "didn't even want to be alive anymore" to my wife and I, and we didn't even have a GI specialist appointment yet to diagnose what he had. As a family, this was our toughest moment ever. Take our house, take our belongings, but please don't take our son. Shortly after we got the call about an opening for the GI specialist, and at the initial appointment, he was immediately pushed to to the ER to be admitted at Golisano Children's Hospital. We spent 4 or 5 days with doctors and MRI scans to determine he had Crohn's disease, and to get him gaining weight back. I've never felt so helpless in my life to see my son in such pain for a month without any medical direction on how to treat it. But luckily he was in good hands as we started Infliximab treatments, his inflammation subsided, and he was smiling again. We thought that was the solution, and were able to exit the hospital to begin life with this new diagnosis for Josh.

Upon Josh getting his second Infliximab infusion at the hospital, he started feeling achy. By the second day after the infusion, his hips were hurting, and by the third day, he told us he needed to stay home from school as his whole body was sore. I stayed home with him that day, and when I went check on him around lunchtime, he was crawling to the bathroom and said his body hurt too much to walk. I immediately dialed the pediatrician and they said take him to the ER. By 7 pm that night, Josh was getting morphine to help with pain, and the only thing we thought it could be was either a flu/cold that was in our house earlier that week, or perhaps his infusion. We were discharged and went home, and things went back to normal  for a while. Yet for his next infliximab infusion, I sat next to him, and after only 2 ML's had been pumped through his IV, he threw up and was bright red in his chair at the infusion center. This is when we knew we needed a new drug to help Josh with Crohn's. We are currently on Stelara, and it seems to be working well for him. He has since been back to the hospital for a procedure to help drain a mass in his lower GI tract. Today he is in school, doing everything a 13 year old 8th grader should be doing. His grades are above a 97 average, and he's in good spirits.

So my interest in racing in this Lake Placid Ironman for the Crohn's and Colitis Foundation stems around raising awareness this disease. I have not "told the world" about my son's diagnosis, other than my family members, as I don't want the pity party for us that life dealt Josh a bad hand. We're managing, and we're tough, and we have a great team of specialists and family support here in Rochester to help us find our way. We love our son, and I want to complete my first full Ironman event for him. I can raise funds and awareness at the same time, and thisi training cycle will mean more to me than any before. I'll need a lot of help to reach my goal of $5,000, and every bit will make a difference. Thank you for your support!

About Crohn’s disease and ulcerative colitis
Known collectively as inflammatory bowel diseases (IBD), Crohn’s disease and ulcerative colitis affect almost millions of Americans. They are painful, medically incurable diseases that attack the digestive system. Crohn's disease may attack anywhere along the digestive tract, while ulcerative colitis inflames only the large intestine (colon). Symptoms may include abdominal pain, persistent diarrhea, rectal bleeding, fever, and weight loss. Many patients require numerous hospitalizations and surgery. Most people develop the diseases between the ages of 15 and 35; however the incidence is increasing in children.
The Crohn's & Colitis Foundation is the largest non-profit, voluntary, health organization dedicated to finding cures for inflammatory bowel diseases (IBD). The Foundation’s mission is to cure Crohn's disease and ulcerative colitis, and to improve the quality of life of children and adults who are affected by these diseases. The Foundation works to fulfill its mission by funding research; providing educational resources for patients and their families, medical professionals, and the public; and furnishing supportive services for those afflicted with IBD.
View More
Donate Now
Achievements