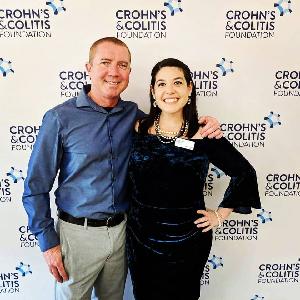 Tom and I at the Champions of Hope Gala for the Crohn's & Colitis Foundation
HOWDY!
Welcome to my personal fundraising page as I embark on my journey to raise funds to find cures for IBD and train for the Palm Springs Triathlon. Read on to find out more about my story and what your contribution would mean to me personally and to the millions currently suffering from IBD.

Every single day, someone new is diagnosed with IBD. That day happened for me when I was 18 years-old. I was in college, loving life and being a carefree teenager. The summer between by freshman and sophomore year, all I could think about was going on an epic adventure to visit my sister who was stationed in Germany. That trip changed my life in a way I had never imagined. My second day abroad, I was having major stomach pains and going to the bathroom non-stop. I've always had what my parents called a "sensitive system" so just assumed my body was adjusting after the 14 hour flight. Things went from bad to worse when I started seeing blood in the toilet, couldn't keep anything at all in my body, and, at the bleakest moment, blacked out on the floor of a bar bathroom because I was so weak and dehydrated. The 14 hour plane ride home was by far the worst day of my entire life. I finally get back to the states, weak and miserable, and assume I'll be fine. This couldn't have been farther from the truth. Nothing ever returned to normal and after months and months of excrutiating pain, severe weight loss, every medical test and procuedre imaginable, I was diagnosed with Crohn's disease.

I thought nothing could be worse than the excrutiating pain and the feeling of not knowing what was wrong with me. Once again, I was wrong. After being diagnosed, I was dealt an even harder blow when I found out there is no cure IBD. Thus began a downward spiral into isolation and depression. Feelings all too common for any IBD patient. After years of different "treatment options" and major diet/lifestyle changes, I am very grateful to be considered one of the lucky ones who has achieved remission. This means that there has been a decrease or disappearance of the symptoms of inflammatory bowel disease (IBD); however, this is FAR from being a cure. I still struggle every day, my diet is still limited, I still always have to know where a bathroom is at all times, and I still have flares from time to time where I'm running to the bathroom and not eating. Even worse, so little is still known about IBD, that within the past year, I've had new doctors tell me that all I need to do is "change my diet" and I'll be fine.

I am very fortunate to have found Team Challenge. Meeting this group of amazing, compassionate, caring people that have become my second family has made a world of difference. Through Team Challenge, I have not only become a member of the Board of Directors for the Crohn's and Colitis Foundation, but I also met the love of my life. My fiance', Tom, has UC, lost his colon to the disease, and lives a struggle far beyond any I've ever known. He's a fighter and continues to amaze and encourage me every day. We all have different backgrounds, stories, and reasons for being part of Team Challenge; however, we all have one epic thing in a common - a dream of a world free from IBD! That's why we continue to do what we do. Season after season, we run, we bike, we swim, and most importantly, we fundraise. We will continue to fight until there's a cure.

I have decided to make a difference in the fight against Crohn’s disease and ulcerative colitis. In October 2020, I will participate in the Palm Springs Triathlon with my Team Challenge family, my TRIbe. This will be a big undertaking, but it will all be worth it because your donations will not only motivate me to the finish, but they will help us get closer to the cure. Won’t you please consider a donation today? One day, when we have cures for IBD, you will be able to raise your hand and say "I helped make that happen. I helped change the lives of the 1.6 million Americans currently suffering". Your donation will not just make a difference to me, but to the many future generations who will hopefully have more options if they're ever diagnosed.

More Important Than Ever...

The fight to find cures for IBD, raise awareness, and fund much needed research is more important now than ever to me. Why? Because just recently, after over a decade of battling with what I thought was IBD, doctors now believe I have been misdiagnosed and actually have IBS not Crohn's Disease. This further highlights how little is known about these diseases and how badly patients need research. The more doctors can understand about IBD, the less likely it will be misdiagnosed in the future.

About Crohn’s disease and ulcerative colitis
Known collectively as inflammatory bowel diseases (IBD), Crohn’s disease and ulcerative colitis affects almost 1 in 100 people. They are painful, medically incurable diseases that attack the digestive system. Crohn's disease may attack anywhere along the digestive tract, while ulcerative colitis inflames only the large intestine (colon). Symptoms may include abdominal pain, persistent diarrhea, rectal bleeding, fever, and weight loss. Many patients require numerous hospitalizations and surgery. Most people develop the diseases between the ages of 15 and 35; however the incidence is increasing in children.
The Crohn's & Colitis Foundation is the largest non-profit, voluntary, health organization dedicated to finding cures for inflammatory bowel diseases (IBD). The Foundation’s mission is to cure Crohn's disease and ulcerative colitis, and to improve the quality of life of children and adults who are affected by these diseases. The Foundation works to fulfill its mission by funding research; providing educational resources for patients and their families, medical professionals, and the public; and furnishing supportive services for those afflicted with IBD.
View More
Donate Now
Achievements